Mysteries of the Mounds Gallery 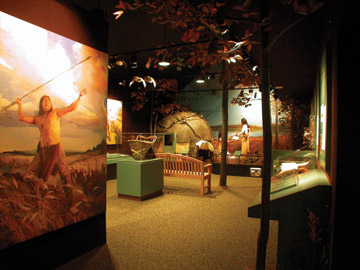 This gallery opened in April, 2009, and contains a diorama of a Late Woodland Camp complete with a replica keyhole pit house. In addition to artifacts and text panels, this gallery contains a theater that runs a 17-minute video devoted to explaining the types of earthen mounds built a thousand years ago and earlier, across the southern half of Wisconsin.

Consider visiting this gallery, watching the video, and then venturing out to nearby Mounds sites that are open to the public. The Jefferson County Indian Mounds Park and Trail is about 10 minutes south of Fort Atkinson on the northeastern shore of Lake Koshkonong. The Effigy Mounds Preserve is located on nearby Whitewater’s west side. Aztalan State Park is located about 20 minutes north off Hwy 89.

The seven cases of the Lawton collection (a remarkable archaeological collection from this area) have been moved from the second floor of the Hoard House to the new Mysteries of the Mounds exhibit on the main floor. They are now available for viewing in this new exhibit in the gallery’s theater.

Fort Atkinson resident, Raymond “Bob” Lawton, collected and arranged the artifacts contained in the seven glass cases within this theater area. He spent more than forty years collecting these items entirely from within Jefferson County, with the exception of the tomahawks in Case 7. While he did purchase some of the objects, including from the Voigt family, most of the items he found around Lake Koshkonong and in the Fort Atkinson area.

Hand made by various cultural groups of American Indians living and trading in the area, the Lawton collection includes a wide range of styles of spear points and arrowheads, as well as axes, mauls, celts, drills, scrapers, knives, pestles, and even fish net sinkers. You will also see pipes, pipe bowls, glass beads, and brass tinklers made from kettles obtained through the Fur Trade era.

Some of the cases containing the collection are constructed from trees taken from the property of Arthur R. Hoard (son of Governor W.D. and Mrs. Agnes Hoard) on the east shore of Lake Koshkonong. Mr. and Mrs. Lawton worked together to arrange the artifacts within the cases. In one case, they arranged the items as a Masonic emblem; its companion piece is the emblem of the Eastern Star in another case.

In 1938, the Fort Atkinson Tuesday Club and the State Historical Society of Wisconsin supported the Fort Atkinson City Council’s creation of a committee to devise ways to secure Lawton’s entire collection. As a result, the following year, the collection was placed on long-term loan in the Fort Atkinson Historical Society’s Museum then located in the lower level of the Dwight Foster Public Library. The local historical society succeeded in purchasing the entire collection from Mr. Lawton in the late 1950s or early 1960s when the museum had been moved from the public library into the Frank and Luella Hoard House, which is now part of the Hoard Historical Museum comples.

Mr. Lawton (1872 – 1965) was the Jefferson County Humane Society officer for more than forty years. Between 1909 and 1939, he owned the Lawton Hotel which sat on the corner of South 3rd and Janesville Streets in Fort Atkinson, until the building was razed in 1973.